I don't Belong To U! 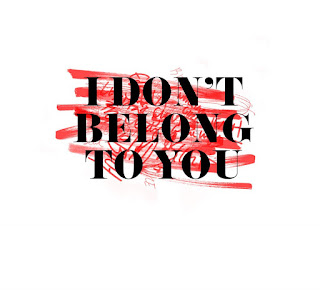 Although my blog is geared towards the hard times and also the amazing times we go through as single moms I also wanted my messages to resonate with teenage girls; because most of my issues steam from my teenage years. I became a mom at the age of 20 years old, and even though my relationship was horrible I felt like I needed to stay to prove my family wrong and to also not become a double statistic a young mom and single. Now before I gave birth to my son at 20 I was actually pregnant right outta high school at the age of 18, when I found out I ended up telling my mom by myself because even though my boyfriend at the time told me he would come around so that we could tell my mom together he never showed up and I ended up telling her by myself. That should've been the first sign that he was no good but me being naive and young I stayed with him and gave him a pass. At 12 weeks I ended up losing that baby while in the hospital I felt my baby fall right in my panties, which according to google was the size of a lime and weighed about a half an ounce ; I swear that was one of the worst experiences of my life. After going through that with him I stayed with him; I ask myself all the time why and I know the answer and its because I have always been insecure and just felt lucky that someone was willing to be with me,and trust me I didn't have any luck with boys I was always the tom boy with guy friends but nobody wasn't checking for me Lol. So fast forward 2 years later and I have Isaiah and I went through hell with him, constant cheating, verbal abuse and just all the round making me feel horrible about myself, but because I still had those insecurities and now I had a baby I felt like I need to definitely stay with him. 3 years later I gave birth to my daughter Imani and let me tell y'all having kids will not make anything better if the relationship is already bad;the cheating continued and I was even confronted by a girl who claimed she was also pregnant by him during the same time I was pregnant. You would think that would've been the last straw, but I  went through another year of cheating and verbal abuse. The verbal abuse finally turned into physical and that's when I had to gather myself and draw the line I couldn't and wouldn't allow my kids to witness and grow up in a household like that. I got the courage to pack me and the kids up and go back to my mom . I was devastated because I did want my relationship to work out, but I begin to realize that I checked out of the relationship years ago and was only staying for the kids and to prove a point to my family and that was getting me no where. I was with him from the age of 18 to 24 and during those years he made me feel like he owned me and that nobody else wanted me and deep down I believed that. He told me that I wasn't the prettiest girl,and people always asked why he didn't stay with his first girlfriend because she was thick and light skin. I felt like I needed to stay because I had two kids and what guy wants to deal with a girl with two young kids. I felt I had to stay because I had no confidence in myself and didn't believe there was someone better out there for me.... So I'm here to tell all young girls who might be in the same situation that I was in; please don't stay with anyone who tears you down and makes you feel less than, don't stay because of the kids because you wont be happy and please don't stay because you feel like that's all you deserve. Don't ever let someone think they have control over you and tell them I DON'T BELONG TO U!

So, a few days ago I was watching Jada Pinkett Smith new Facebook show Red Table Talk starring herself, her mother Adrienne, and her Daughter Willow, and the topic that week was body confessions. So, a viewer sent in a question about colorism in the black community and Adrienne suggested that everyone watch a documentary called Dark Girls.  So, me being a dark girl myself decided to check out the documentary. So, it was a  Friday  morning when I decided to watch it and I was at court for work. The doc started off with a beautiful dark skin little girl only about 6 years old, and she said she didn't like being called black; that statement touched me so much because I've felt that way growing up and I felt her pain to the point that I started to get choked up. While watching the show, I could relate to all the testimonies of the women and girls. Growing up being dark skin was not "it". My own personal experience was horrible. It might not have seemed that w